Charlie Wethered's recipes have been published in the Eton Cookbook and on the BBC website. Having reached the final twelve contestants in MasterChef 2012, he subsequently worked on the mains section at Heston Blumenthal's two Michelin star 'Dinner'. He then founded Quail London, which caters for many prestigious social gatherings as well as more intimate private parties. Clients include Sipsmith Independent Spirits, Prestat Chocolates & Truffles, Boujis, Antonio Carluccio, The Lisson Gallery and The Sladmore Gallery. 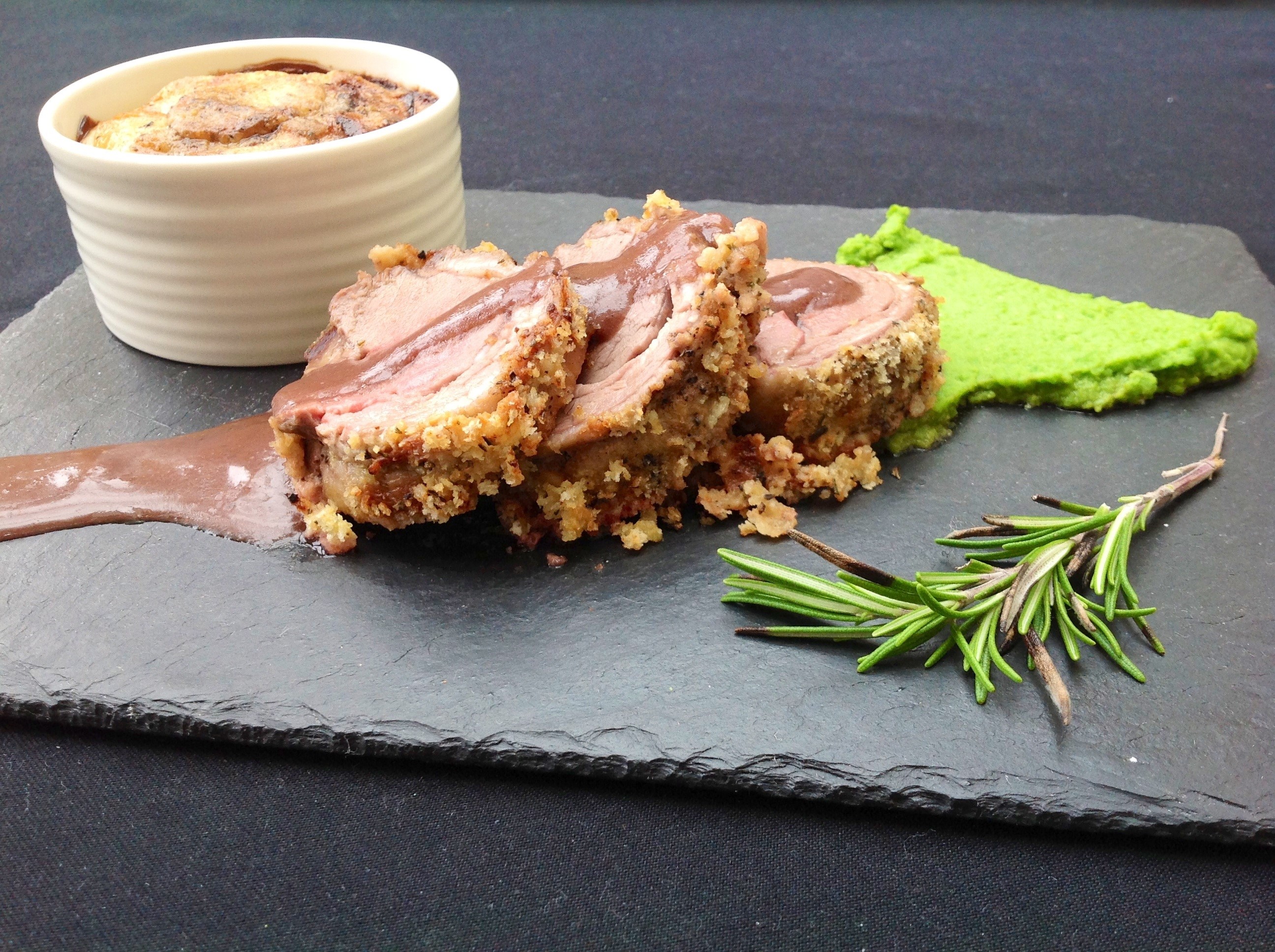 Peel and finely slice the potatoes. Layer in four buttered ramekin dishes, adding a thin layer of butter half way through. Pour the milk equally between the four ramekins. Season with salt and pepper. Place on the middle shelf of the oven for 40 mins, until browned on top.

Heat the vegetable oil in a frying pan over a high heat. Add the saddles of lamb and cook until browned on all sides. Set aside on a wire rack and leave to cool.

Meanwhile, mix the panko breadcrumbs, rosemary and thyme in a bowl. Season with salt and pepper. In another bowl, mix the yoghurt and mustard.

When the lamb saddles are cool, cover them in the yoghurt mix then roll in the breadcrumb mix. Place in a roasting dish and add to the already heated oven for 15-20mins depending on how rare you like it.

Whilst the dauphinoise and the lamb are cooking, bring a large pan of water to the boil. Add the peas and bring back to the boil. Drain. Using a Magimix pur├®e setting, pur├®e the peas and the mint together, giving a smooth lime green coloured pur├®e. If you do not have a Magimix, press the peas through a sieve or alternatively mash. Season to taste.

Bring the dauphinoise and the lamb out of the oven. Remove the lamb from the roasting dish and cover with foil. Pour the remaining juices from the lamb roasting dish into a saucepan together with the red wine. Heat and add the cornflour dissolved in a little water. The gravy should thicken after a few minutes. Season with a little salt and lots of ground black pepper. Sieve the gravy so that no lumps remain.

Place the pur├®e on the plate along with the dauphinoise. Cut each saddle into six pieces, giving three per person. Lay over the puree. Pour the gravy over the saddle and serve.

Recipe of the Month